Following on from my previous blogs on Argentina, I now continue with a trip to Chile which David and myself visited from 31st October, 2001 to 24th November, 2001. Once again we worked out our own iternary with the use of trip reports taken off  the computer, as we had decided not to use the services of bird tours or guides. All the photographs were taken by ourselves. Again it will not be a full trip report but just covers a number of interesting species seen, and as with my previous blogs, I will post the report on a number of different blogs.

We landed at Santiago and hired a car and drove to Quintero on the Pacific coast where we were able to arrange a pelagic trip for the following day. Chile is a very long but extremely narrow South American country, and by carefully planning and using internal air flights we visited birding sites from Northern Chile bordering onto Peru and enclosed by the Atacama Desert, to the far South of Chile in Patagonia and even caught a ferry to Tierra del Fuego. We also visited a number of sites in central Chile, and on our final day we did a second pelagic trip again from Quintero. 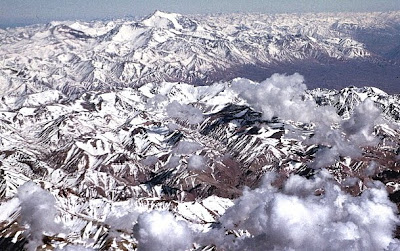 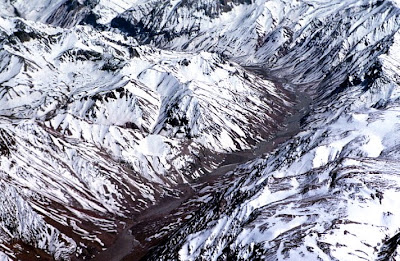 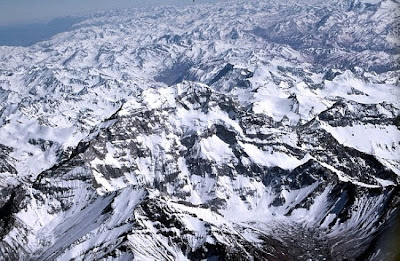 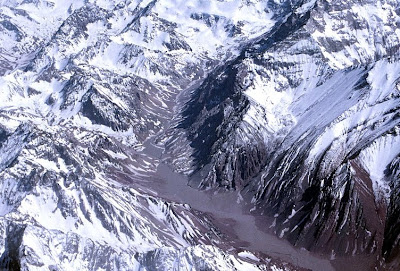 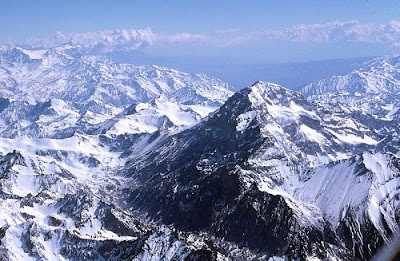 Flying over the Andes heading towards Santiago, Chile. 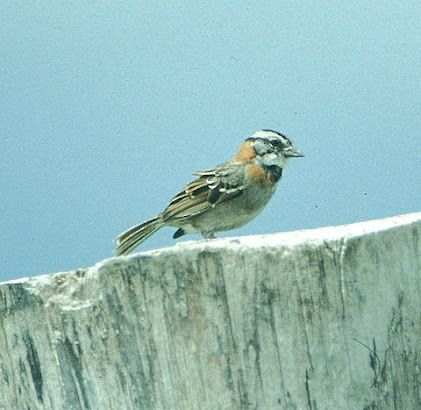 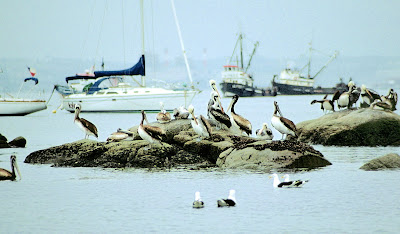 We drove straight to the coast to the port of Quintero.
This shows Peruvian Pelicans in the harbour at Quintero.
We approached the local coastguard office, and managed to
arrange a pelagic trip out off Quintero for the following day.
We then visited Punta Concon and the mouth of
Rio Aconcaguaboth nearby, and spent our first night
camping at La Campana Reserve. 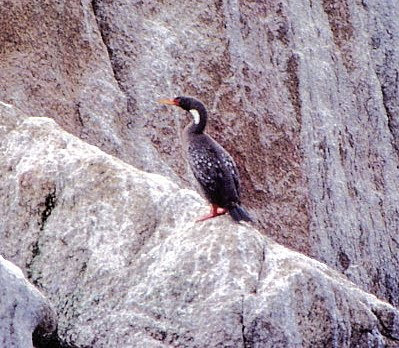 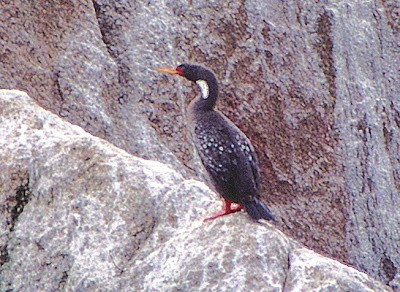 Red-legged Cormorant -  Phalacrocorax gaimardi
Remains close to the shore and breeds in loose colonies on cliffs. Near threatened  with a world population of 10,000 to 25,000 individuals. We saw 15 Red-legged Cormorants at Punta Concon. 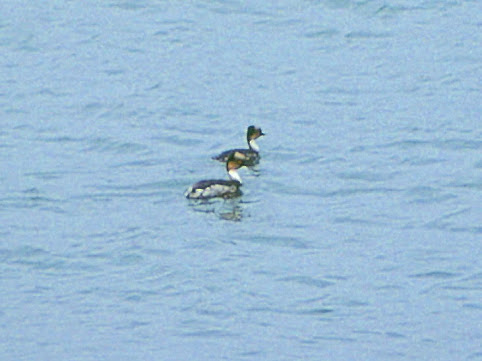 Silvery Grebe - Podiceps occipitalis
Two races with occipitalis is migratory and often present on the sea. whereas juninensis of the altiplano regions between 3,500m-4,500m. A pair of Silvery Grebes belonging to the race ocipitalis with the yellow ear tufts showed well and were on the sea off Punta Concon. 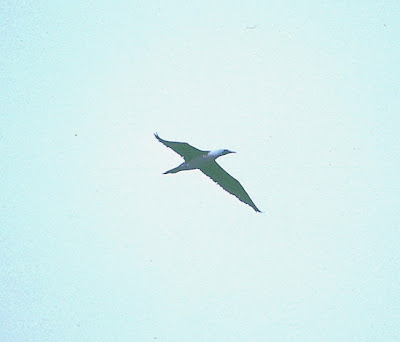 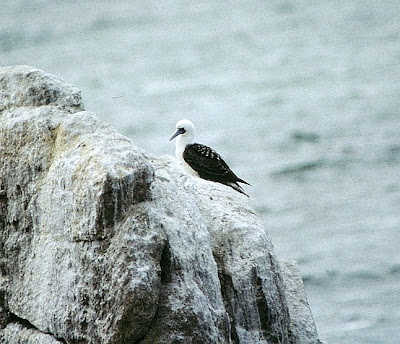 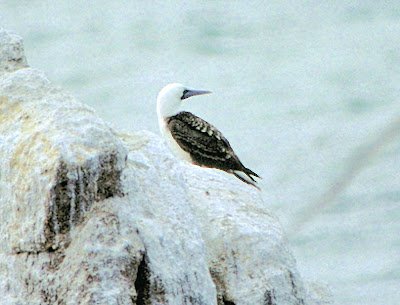 Peruvian Booby Sula variegata
The common and widespread Booby in Chile. We saw large numbers during our trip. 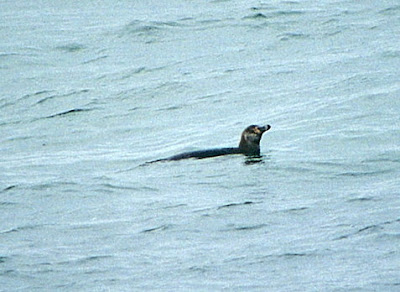 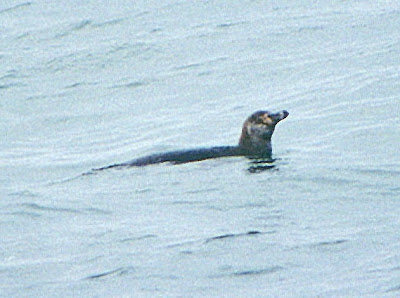 1st W Humboldt Penguin Spheniscus humboldt  off Punta Concon.
We were pleased to connect with this species of Penguin as we have seen the majority of the other Penguin species other than Emperor. We also found two Humboldts on our first pelagic trip off Quintero. It is now classified as Vulnerable with only 3,000 to 12,000 individuals, and the young birds disperse away from the breeding grounds while the adults remain close to their breeding sites. 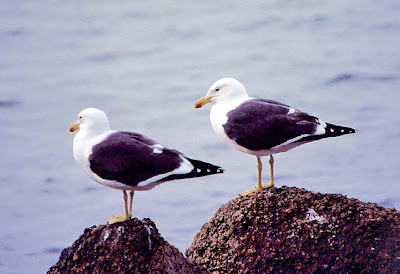 Pair of Adult Kelp Gulls Gaviota domonicana on the rocks at Punta Concon. It proved to be the commonest and widespread Gull in Chile. Prefers rocky coasts, with the largest numbers close to fishing ports, although it does venture inland to forage in urban areas chiefly around rubbish dumps and sewage outflows.
With large numbers of birds passing close by off the headland, we decided to carry our a sea-watch which proved successful. 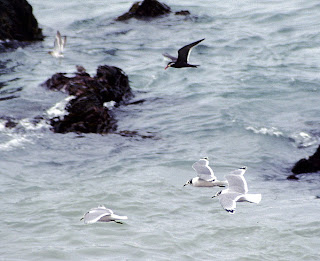 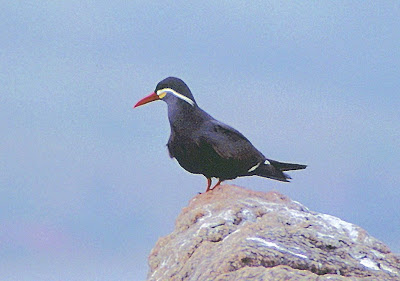 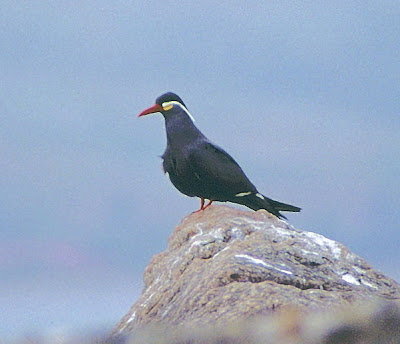 Adult Inca Tern Gaviotin monja Coastal and associated with the rich upwelling of the Humboldt Current. We estimated 250 Inca Terns off Punta Concon. 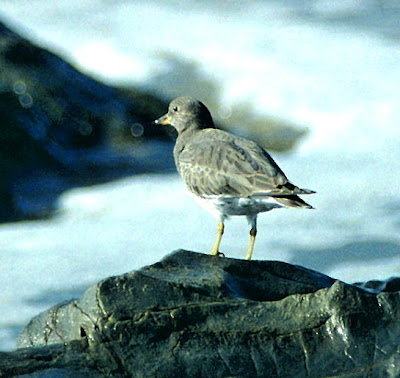 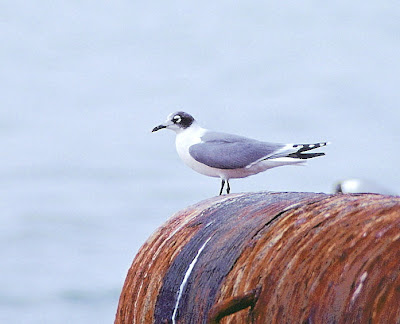 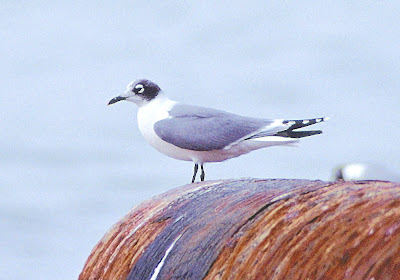 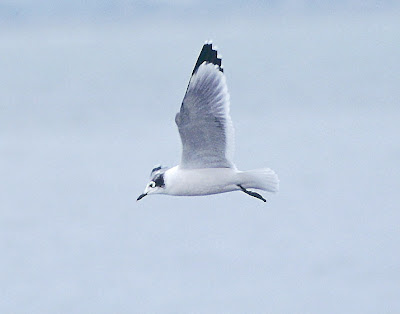 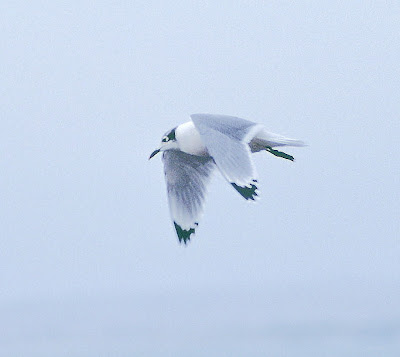 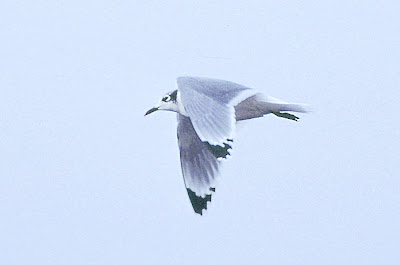 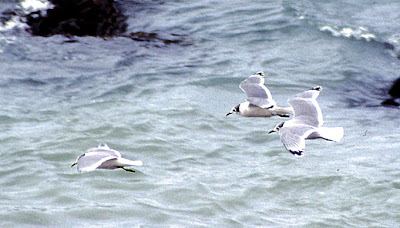 Fraklin's Gull Larus pipixcan Winters often in large flocks throughout Central and North Chile. Chiefly on the coast but also occurs on larger inland lakes. We recorded 300 at Rio Aconcaqua and at least 1,000 at a fish factory near Arica. 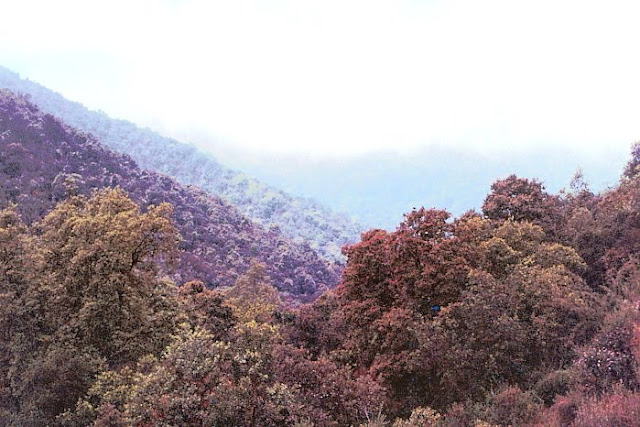 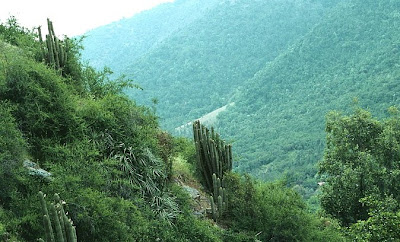 View of the forest from the camp site at La Campara