With SE winds our hopes were high for a sea-watch and we watched from dawn at 06.30-10.30. At long last the flood-gates opened and probably almost 5,000 birds moved past us during the 4 hour watch. We were joined by RB, RE and a face from the past Pete Clement. Unfortunately, RKH only joined us towards the end of the watch. Brent Geese were moving at dawn and within the first five minutes 250 were seen. Highlights included 56 Velvet Scoters, 33 Little Gulls, 8 Scaup and a Little-ringed Plover which came in off the sea at 06.57, this is just our 13th record since 1960 and our first record for March.
LP was covering some of the Headland sites and we also covered a number of sites with other observers. Small numbers of night migrants were seen included our first Willow Warbler for the year.

Large numbers of Brent Geese on the move today 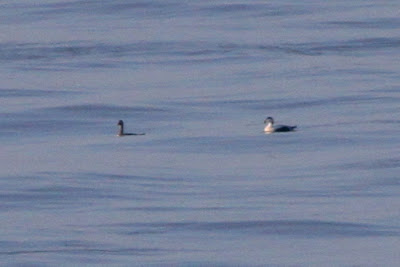 Poor record shot of a pair of Eiders off Birling